The Power of Two (Notes on Collaboration)

From the archives: The author of Powers of Two, Joshua Wolf Shenk, talks with Robert Siegel about creative collaboration in an interview at NPR.

From the interview: "Lennon and McCartney, they just encapsulate all of the themes. Their meeting story is just gorgeous. In 1957, 15-year-old Paul McCartney ambled onto the field behind a church in Liverpool, and he saw this 17-year-old kid full of swagger, and he was vamping to the lyrics of a Del-Vikings song, making them up, turning them into a blues song. And Paul McCartney was the kind of kid who would know exactly when that was happening because he was so meticulous, he had memorized the lyrics... Later, John heard Paul do his stuff — he could do perfect imitations of Little Richard and Eddie Cochran, Carl Perkins. And so it was this perfect meeting of guys who were totally in line in their love of this music, and yet their sensibilities and their temperaments and their qualities were at odds. So you immediately have this profound union and a profound tension that carries all the way through their relationship and leads to their great work."

Read more at The Atlantic. 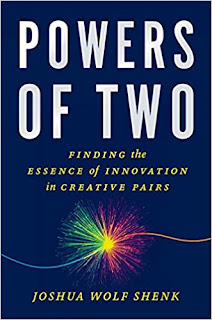 Powers of Two: Finding the Essence of Innovation in Creative Pairs. 2014.

By Joshua Wolf Shenk.Weaving the lives of scores of creative duos—from John Lennon and Paul McCartney to Marie and Pierre Curie to Steve Jobs and Steve Wozniak—Joshua Wolf Shenk identifies the core qualities of that dizzying experience we call "chemistry." Revealing the six essential stages through which creative intimacy unfolds, Shenk draws on new scientific research and builds an argument for the social foundations of creativity—and the pair as its primary embodiment. Along the way, he reveals how pairs begin to talk, think, and even look like each other; how the most successful ones thrive on conflict; and why some pairs flame out while others endure. 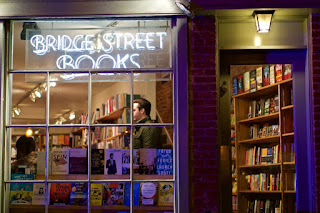