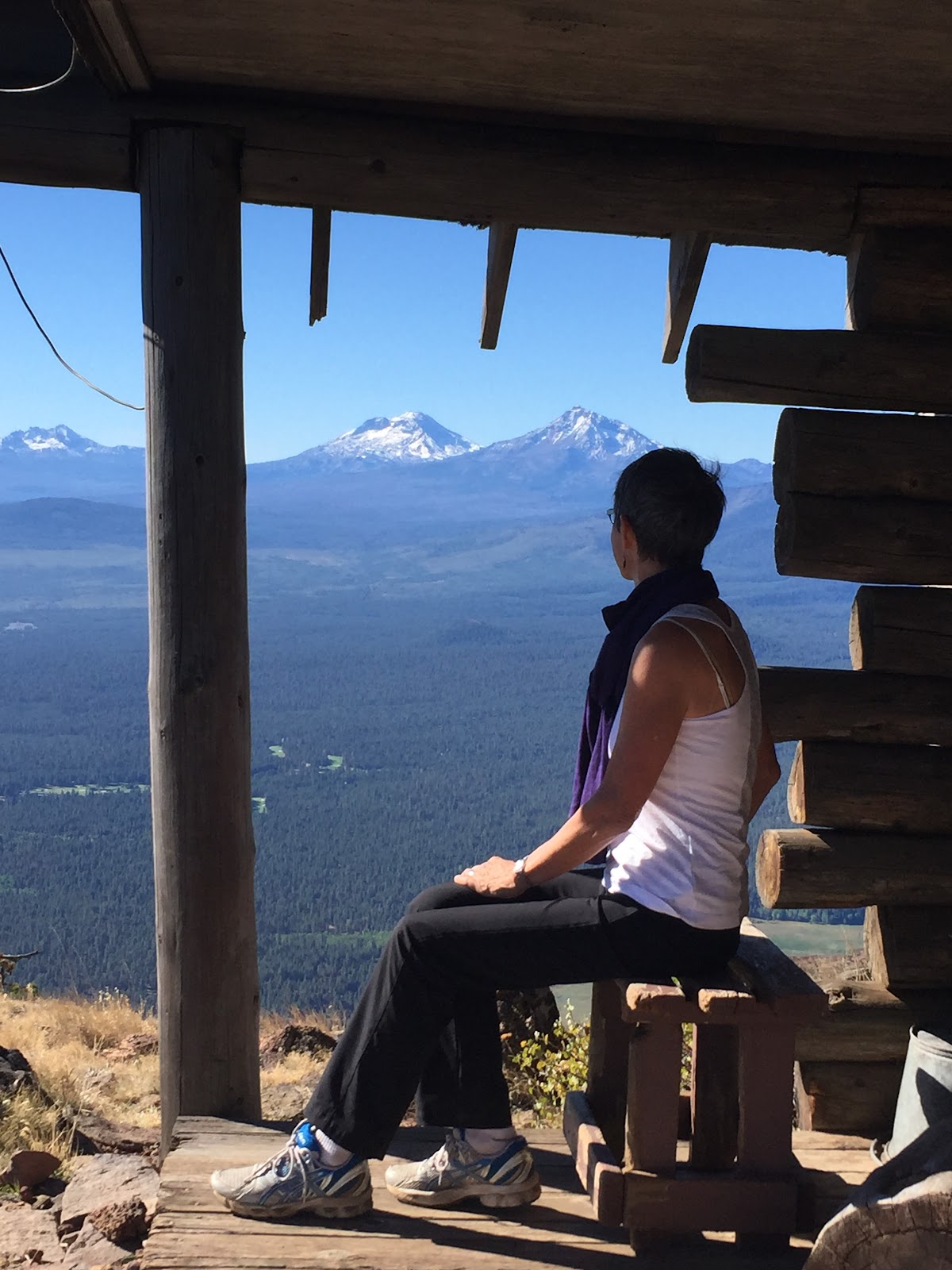 Excerpted from conversation with other artists in residence at PLAYA: Sue Landers, Rachel Zollinger, Renee Couture.

Before coming to PLAYA, I made a last minute decision not to bring the project that my application proposal represented, and instead to come open to new work with no ideas about what that might be. It was a relief and a joy to decide this, which told me it was the right decision—but it was also a very stepping-off-the-edge kind of feeling, since I had written very little for about 3 years—I wasn’t even sure I knew how to do it anymore, and I had begun to wonder if the well had been sealed in the interim.


But the decision to just come and just write—without expectation (i.e. “standards,” which was an important part of it for me) and without inspiration, along with the space and time and sublimely liminal landscape in which to work and play, set in motion a new kind of flow of language that became the new work. (I kept having to pull over to the side of the road to write things down on the day I arrived.)

And specifically what began was/is a long-poem sequence: a kind of conversation with language which that “carelessness” (by way of which I was not “trying to make a poem,” but just open a conversation) allowed. And of course inspiration has come in, precisely because I have not been
looking for it! 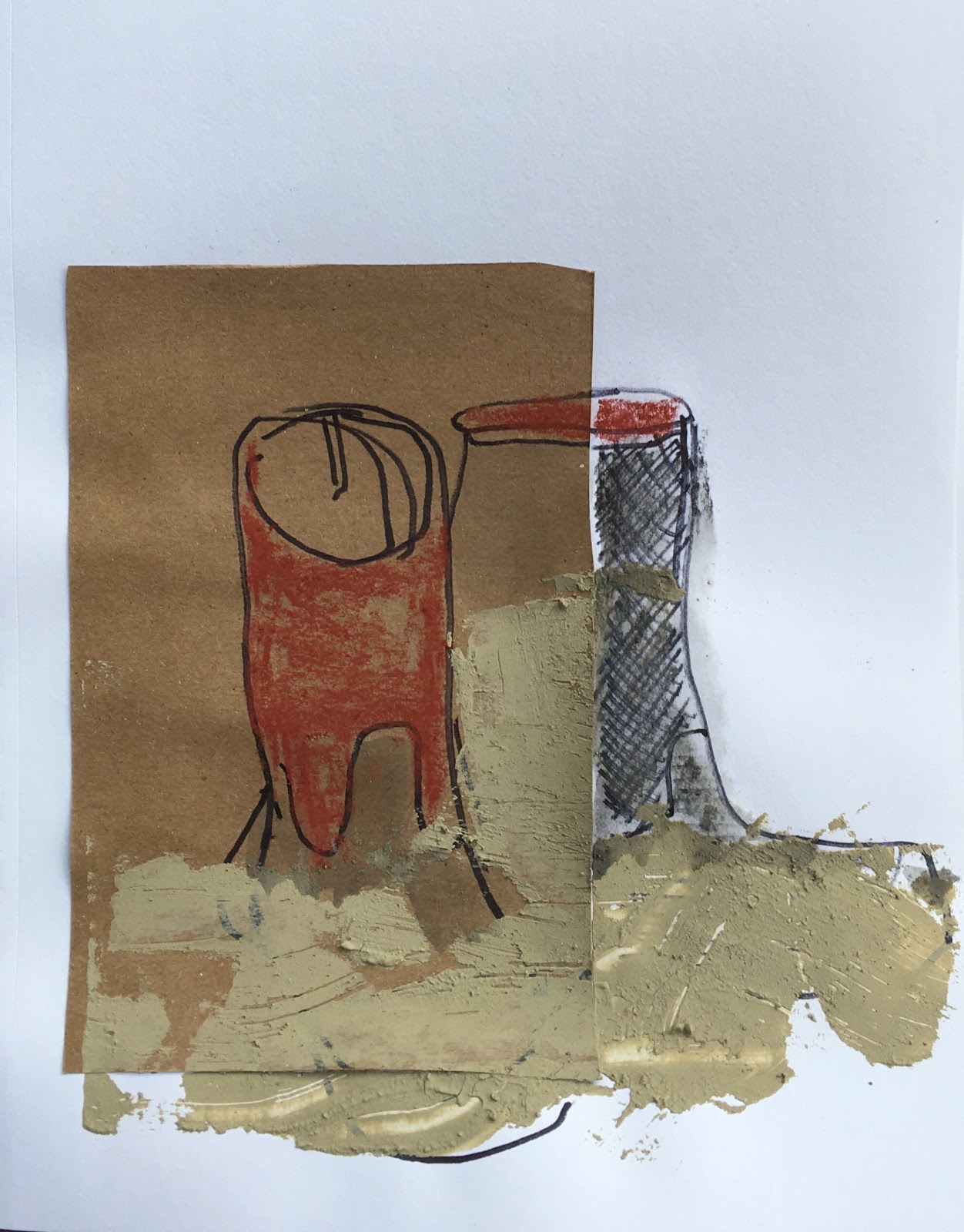 As a way to refresh my seeing and my silence (and also to explore in a non-verbal way the things that are showing up for me psychically), I try to do some graphic work every day. The phrase “feet of clay” had been coming to mind, so I made a quick sketch using local charcoal and some of the literal clay of the playa. As a result, some language has begun to coagulate around the metaphor also. 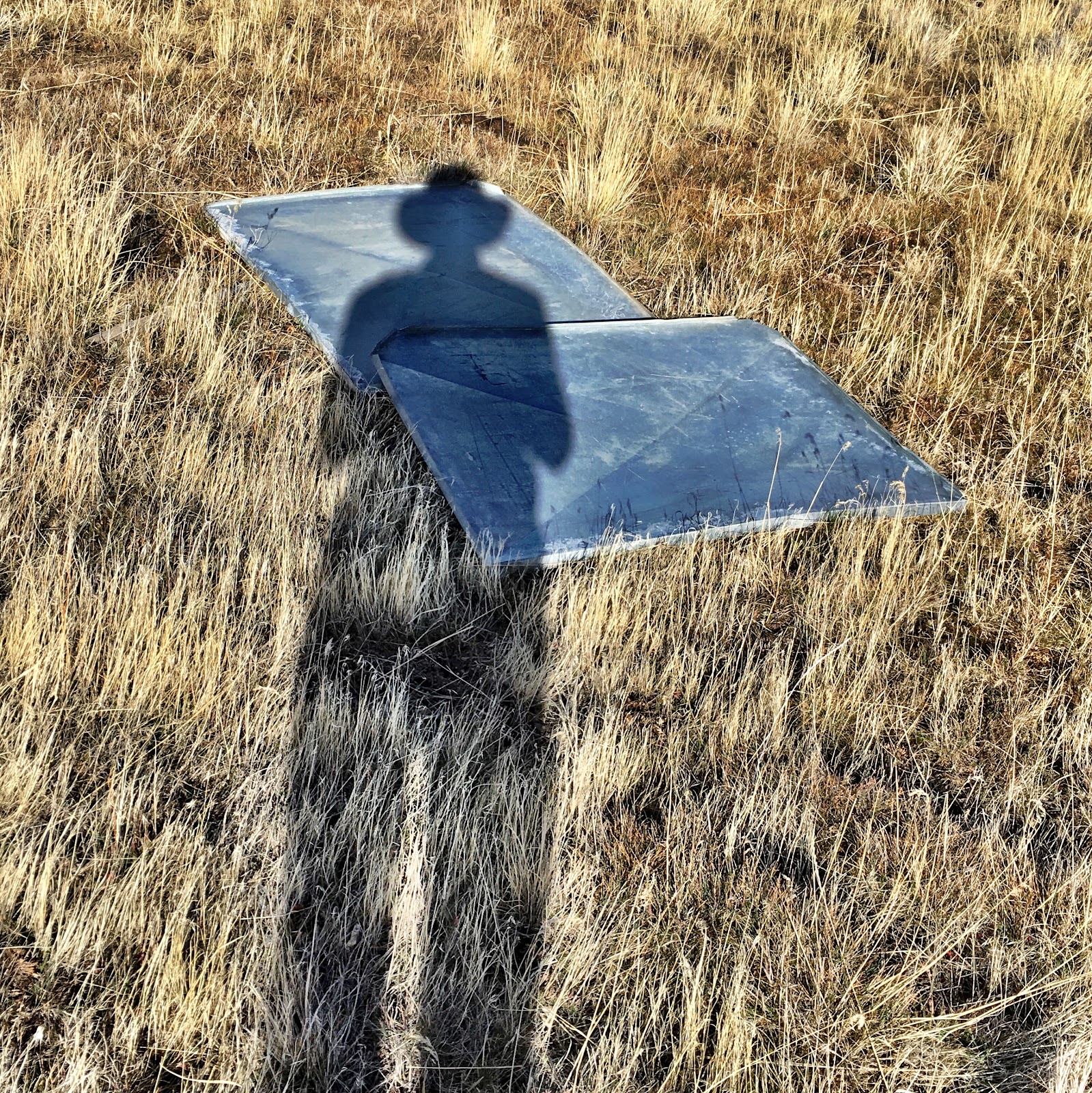 I call this “shadow selfie:” one of a series. Again, I think what attracted my interest were the words “shadow self,” which somewhat to my discomfort (but it’s also fascinating and liberating) has begun showing up in my poems more boldly, the longer I listen. 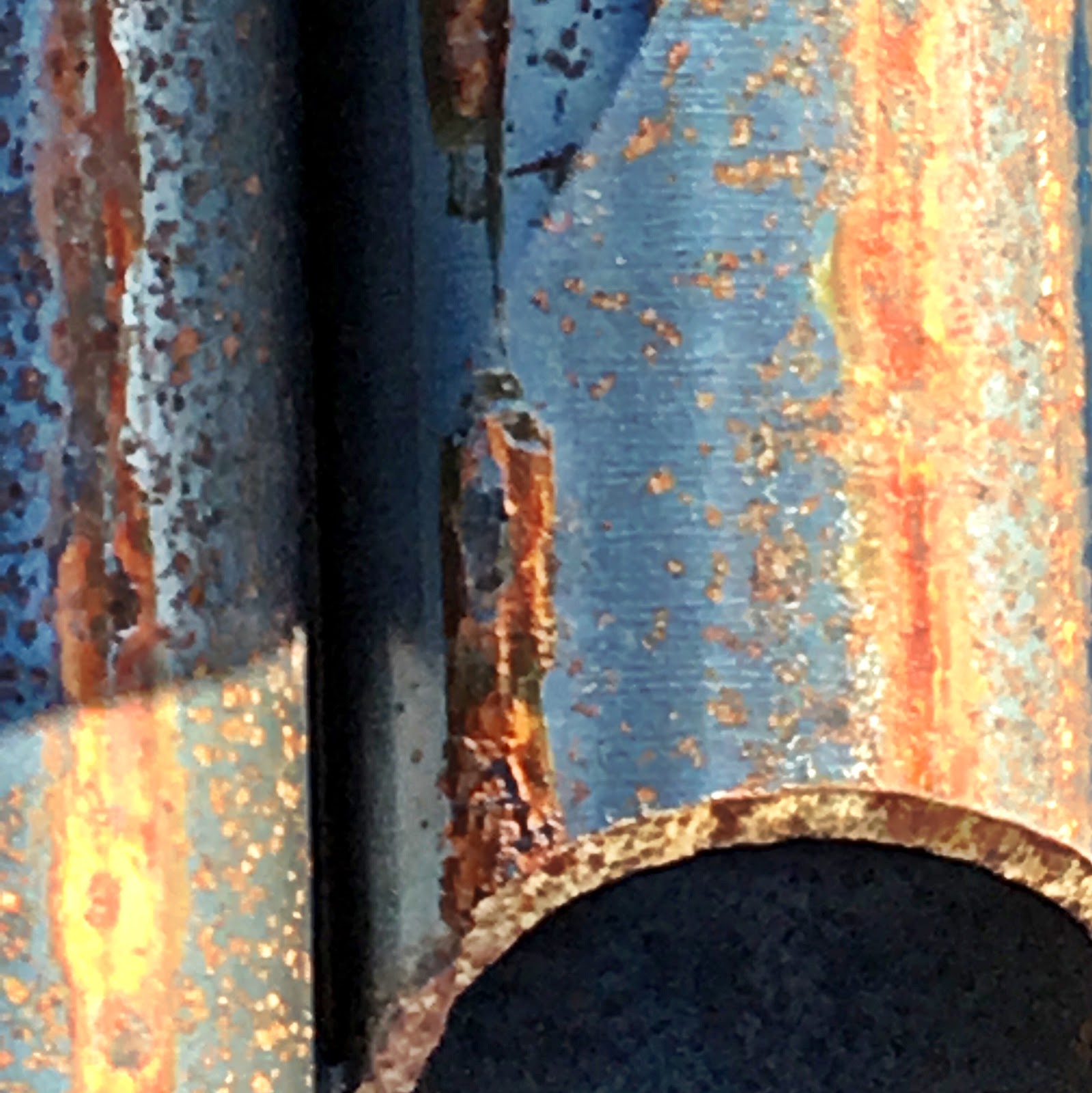 I love to look at things so closely that the familiar disappears back into the unknown, the often breathtaking beauty that appears at that liminal place. This is a close-up in a pile of pipes on an old construction site up the hill from PLAYA, which didn’t look like much until I got very, very close. It reminds me to do that with language, too: zoom in. 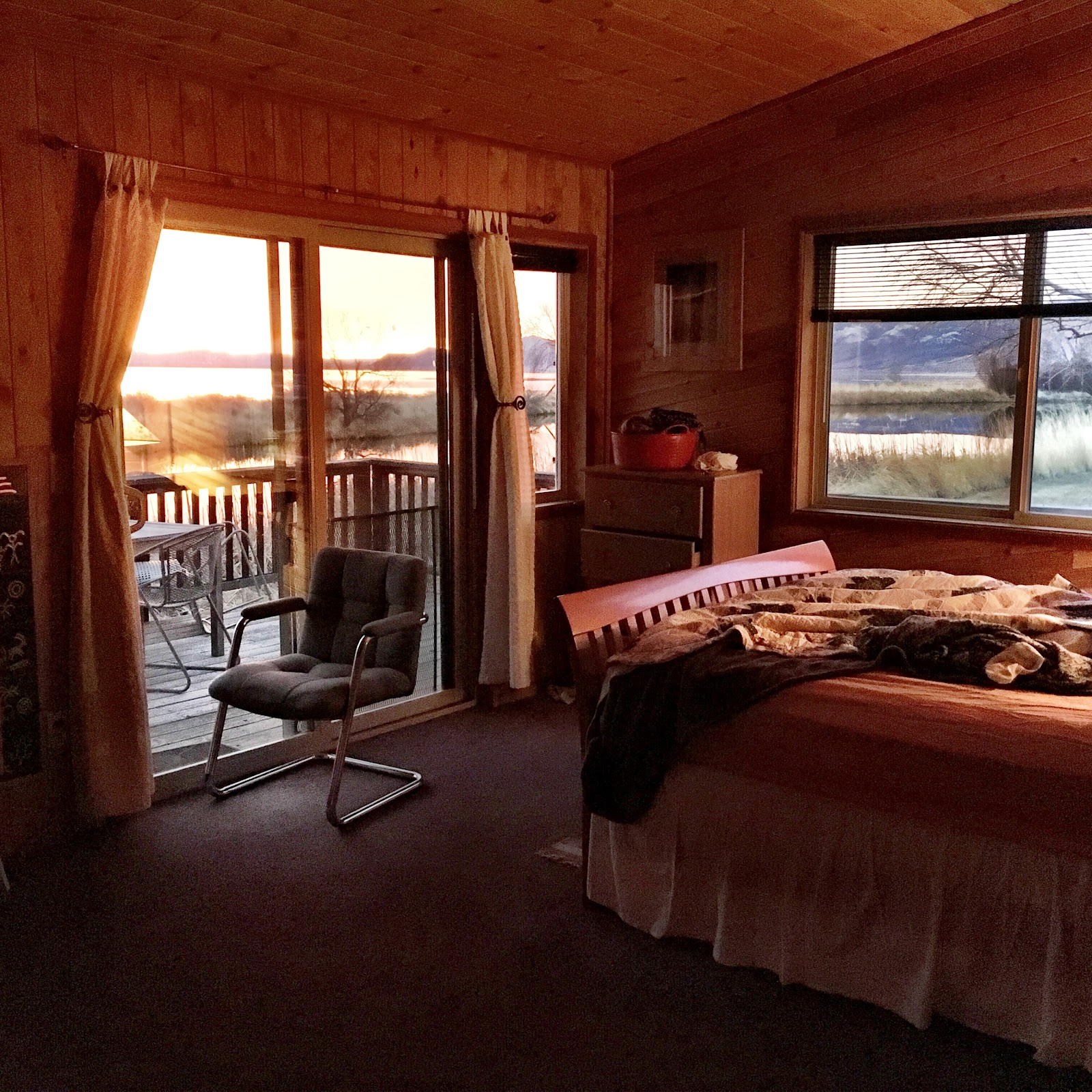 Interior of my cabin at PLAYA, sunrise. There’s a desk, too, but most of the new poems here get born in that bed!


On the river one day, love, you showed me an eddy fence.

See where some current slides left into backwater?
How it slows and pools while the rest keeps on rushing?

As though the water’d divided and stayed still whole:
one water, two ways, the fence its shift and glue,

itself nothing, the water –a hundred percent of it—
backing or flowing, nothing left for the fence,

yet there the fence was, non-existing in spite of this.

And where you find one you fish it, you’d showed me then.
See all the matter that catches there?
And I saw:

insect shells seed cases
twigs and some clots of foam
dust in a rusty scum.
Fragile steeples of mayflies’ wings transparent in sunlight.

All these bits of the living and fallen dead
matted lightly together there,
felting a rind, a seam.

Locating the fence and adorning it,
yet not, of themselves, the fence.

Saw a trout sipping, passing with ease
between regions of swirl and flow which the eddy fence was.

Not a dwelling I saw
a way.

When I’m on a river, I can feel the way time is an abstraction, because it disappears into the experience of the flow of phenomena that is what “time” really is. I live on a river—this is a photo of me on that river this summer. I do just love anything that gets me into a long flow!

It was late when I walked up the gravel
road to the clear-cut hill. Loggers gone
for the day, feller-buncher machines all still,
their claws and blades cooling.
A low sun laid its thick light on the slope,
the light sieved through the last, lean stand.
Into those wrecked woods I walked,
straight to the center pile,
laid myself down on a log
and apologized for my species.

I apologized to those trees for my species
with tears, but not without greed:
I wanted a word in turn.
Of forgiveness, reassurance,
I don’t know—I wanted a word.
Which didn’t come.
And what was I thinking, wanting more?
The trees, after all, were dead.

The trees were dead—only the light was there.
Which I saw (as I stood between the machines
and their gruesome business, amid the piles and vines),
coated the whole sorry mess of us all,
without chastisement or preference.

Without chastisement or preference the light
left, and I walked back down that road
and up my own, home to a solitude I was
bereft of now, sullied as it was.
Woke the next day to watch, over again,
one fir after another lean to the left
and fall, keening and cracking (Screamers,
the painter Emily Carr had called them:
final splinters that shriek as the trunk is torn).
For so long—oh, forever—I had counted on the forest’s
persistence there, its green and cool surround.
Not to escape the sufferings of the world:
from which to bear them.

Now the violence was taking the forest, too
while I stood on my cedar deck,
inconsolable, seeing unceasingly.

Inconsolable, seeing unceasingly
a word arrived through the wound—
This is what it is to bear witness,
I saw inside. As the woods got small
the heart had to grow larger. To become,
by its breaking, what those woods had been.
Spacious, the heart would have to become,
and huge. Enough to hold all the trees
and their absence, and every other thing.


Donna Henderson is the author of three poetry collections, most recently The Eddy Fence (Oregon Book Award Finalist, 2011). She holds an MFA from Warren Wilson College. She also practices clinical social work and teaches yoga in north-central Oregon, where she lives on the Deschutes River. More at donnacatehenderson.com. 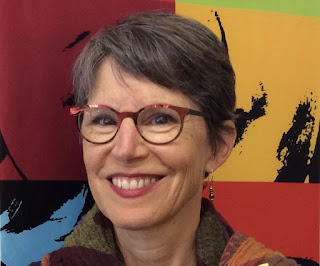